Despite the quality production of apples in the Kashmir valley, the progressive fruit growers are very dismayed and upset due to low rates in the market.  The largest employment generator in Jammu & Kashmir is the apple industry, providing 400 man-days per year per hectare, employing 3.5 million people, and earning about 10% of its GDP. It is a demand-driven sector and falling apple prices are a real worry. Apple growers are at a loss.

Jammu & Kashmir has tremendous potential for enhanced production and export of quality apples. Kashmiri apple is famous both in taste and appearance. It has gained fame in the export markets but does not fetch good returns due to many reasons. Apple contributes 60-65% to the total horticultural crop production in Jammu & Kashmir from an acreage of over 50 percent. The apple production sector is the backbone of the rural economy because the majority of the population in rural villages is involved in this sector. The total apple production in Kashmir in the years 2020-2021 according to the Directorate of Horticulture J&K was 1695000.00 metric tonnes and in Jammu Division it was 24415.69 metric tonnes. The whole U.T of J&K produces 1719415.69 Metric tonnes of apples. The major producer was the valley of Kashmir.

In the world, India ranks seven in apple production with a share of only 3% among all fruit crops.  Jammu & Kashmir boasts around 80% share of the total apple produced in the country. Apple cultivation and its value chain are one of the mainstays of the rural economy with revenue of around Rs.1500 crores. According to the Directorate of Horticulture Kashmir/Jammu, 1719416.69 Metric Tons of apples were produced in the year 2020-2021 in U.T. of J&K.

This figure suggests huge expansion and growth. A flourishing apple industry was contributing significantly to the erstwhile states and the Indian economy.

Instead of having a huge role in the Indian economy, Kashmir’s apple farmers are in distress today due to the fall in prices of apples in markets. Last year the average rate of delicious apple boxes was 900-1100 but this year the same box with good quality was sold for 500-600 rupee with a minimum of 400 loss in the box.

While the apple sector suggests huge expansion and growth, currently, this sector in the valley is taking a major hit due to many factors: unnecessarily halt of apple-laden trucks on the Srinagar Jammu highway, spurious pesticides and fertilizers, soaring market prices, and exorbitant rates of the item,  poor marketing intelligence, inadequate storage facilities, lack of technological development, insufficient and inefficient marketing infrastructure, massive labor force and transportation entail huge costs to apple farmers today are major hindrances in apple industry in the region.

Apple growers feel that if the apple sector in Kashmir gets impacted presently, then the economy will suffer immeasurably.

Despite the quality production of apples in the Kashmir valley, the progressive fruit growers are very dismayed and upset due to low rates in the markets. Many farmers decided to cut their apple orchids and many axed their orchids due to low rates for apple fruits in outside markets and other challenges facing fruit growers of Kashmir valley. This may force progressive growers to close their fruit cultivation in the future if the present situation continues. The Bangladeshi fruit traders also decided to wind up their business units from Kashmir Mandis due to the losses they suffered by halting of their fruit-laden trucks on National Highways.

Apple cultivation in India is dominated by Kashmir, which produces 78 percent of India’s total annual output of around 25-26 lakh metric tonnes (MT). If apple production in Kashmir gets impacted, it could devastate Kashmir’s economy and also impact the country’s trade to a considerable extent. 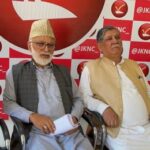