JAMMU, Nov 15: The grant of reservation to the Pahari community in Jammu and Kashmir will not have any effect on the quota of the Gujjar and Bakerwal communities, Lieutenant Governor Manoj Sinha said today.

Speaking to reporters on the sidelines of a programme here, he referred to Union Home Minister Amit Shah’s statement during his visit to Rajouri and Baramulla on the grant of reservation to the Pahari community.

“Some people are trying to mislead the communities for political reasons, but I again reiterate with confidence and responsibility that there will no change in the reservation quota of Gujjars, Bakerwals, Gaddis and Sippis,” Sinha said.

Gujjars and Bakerwals have been holding protests against the Centre’s move to give Scheduled Tribe (ST) status to Paharis.
“I urge those undertaking Padyatra to return home. Some people with vested interest are spreading rumours on reservation. They are the same people who do not want peace and progress in the region”, the Lt Governor said.

We recognize the critical role and contribution of tribal community in the development of J&K UT. They are prime mover of the progress. Tribal community is our moral compass and taught us the values of co-existence, oneness, harmony and sustainable living, the Lt Governor said.

Earlier, Sinha addressed a Janjatiya Samagam on the launch of week-long festivities on Janjatiya Gaurav Divas, at the Convention Centre.
Paying tribute to iconic freedom fighter Bhagwan Birsa Munda on his Janm-Jayanti, he remembered the immense contribution of the tribal freedom fighters & brave heroes in freedom struggle and nation building.

“The nation will forever be indebted to the bravery, courage & supreme sacrifice of Bhagwan Birsa Munda and other tribal icons”, he said.
The Lt Governor further added that after decades of wait, the Prime Minister has transformed the dream of social equity and justice into reality. “It has brought fast and radical change in the lives of tribal community and paved the path for socio-economic growth.”

On the occasion, the Lt Governor shared various initiatives and resolutions taken by the UT Government for the welfare of the tribal community and tribal youth.
We are making dedicated efforts to harness the potential and channelize the productive energy of tribal youth and women so that new generation can transform the economic fortunes of their families and contribute to cultural and social vitality, he said.
Special emphasis is being laid on beneficiary-oriented schemes and welfare infrastructure with priority to road connectivity, power supply, drinking water, modern tribal villages, self-employment, healthcare, skill development, scholarships and education, he further added.

Sinha underscored that the livelihood generation for tribals by harnessing the wealth of ‘Van Dhan’ aims to tap into traditional knowledge and skill sets of tribals by adding technology & IT to upgrade the Pradhan Mantri Van Dhan Vikas Yojna at each stage and convert tribal wisdom into a viable economic activity.
“We are promoting a culture of excellence in our schools in tribal-populated areas through smart classrooms. These schools will act as a vital source of new knowledge and innovative thinking, and as providers of highly skilled students”, he said.
Enumerating the steps taken to give impetus to the socio-economic development of the tribal community, the Lt Governor said, apart from Forest Rights Act, several infrastructures like transit accommodation, boys & girls hostels, Eklavya model residential schools, mini Sheep farms, new dairy units, smart card and trucks for migratory population, Pradhan Mantri Aadi Aadarsh Gram Yojna, Coaching programmes for NEET/JEE, UPSC, Technology Enabled Education Scheme and Tribal Research Centre have been created.

“I am confident the Janjatiya Gaurav Saptah will not only celebrate the rich contribution of tribal community in Indian freedom but instill a sense of pride in the tribal tradition and cultural values”, he asserted.
Janjatiya Gaurav Saptah will act as a fillip to the efforts for preservation of tribal arts and culture in this hyper connected and internet driven world, to encourage upcoming artists and students of tribal literature, he added.

Earlier, the Lt Governor launched web portal for Tribal Awards which will streamline and bring transparency in nomination process.

Rajeev Rai Bhatnagar, Advisor to Lt Governor, speaking on the occasion extended his wishes and greetings to the tribal community for the Janjatiya Diwas and highlighted the reforms introduced by the Government for the empowerment of tribal population of J&K. He lauded the contribution of tribal community in the progress of the UT.
Dr Shahid Iqbal Choudhary, Secretary to Government, Tribal Affairs Department, in his welcome address, highlighted the landmark initiatives for the welfare of tribal community.
Impressive performances by the artists showcased the tribal culture and heritage of Jammu Kashmir. As a part of the celebrations of Janjatiya Diwas, procession of tribal artists, sports activities, Swachhta drive, career counseling and other such programmes are lined up, it was informed. 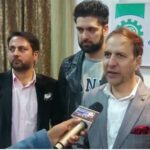 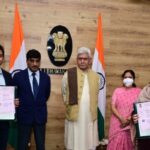