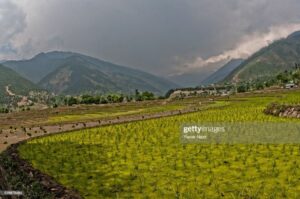 Srinagar, Sep 10: Land under paddy cultivation in Kashmir is on decline as around 30,000 hectares of land has been lost since 2013.

Official documents quoted by news agency Kashmir News Observer (KNO) reveal that in 2012-13 the land under paddy in Kashmir was 162,309 hectares while the production was 621.64 metric tons with the yield of 38.3 quintals per hectare.

Meanwhile concerned civil society voices believe that while the agricultural land is shrinking at an alarming rate in Kashmir, the government is not taking decisive steps to address the crisis.

They said that thousands of kanals of abi awal land have been converted for commercial purposes across the Valley and that if the land conversion takes place with present pace time would not be far when there will be no land for agriculture left in Kashmir.

There is also a viewpoint that besides the trend of constructing complexes on agricultural land, farmers are also shifting to horticulture given that the returns from agriculture are relatively low and the incomes from it are not able to provide sustainable livelihoods to farming communities.

The number of brick kilns, coming up of big complexes, residential houses and shifting to  horticulture have been the main reasons that agricultural land is shrinking day by day, they observe.

They said that they aren’t even getting the amount from the paddy that they spend on it from paddy sapling, plantation to thrashing. —(KNO) 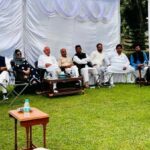