New Delhi: The Enforcement Directorate (ED) has sealed the office of the Young Indian in Delhi over a case linked to the National Herald newspaper.

Sources in the Enforcement Directorate said the office of the Young Indian at Delhi’s Herald House was temporarily sealed as there was no one from their side in whose presence searches could be conducted on Tuesday and Wednesday.

The case pertains to the ED probe into the alleged financial irregularities between Young Indian and Associated Journals Ltd (AJL), which publishes the National Herald newspaper.

The Young Indian took over Associated Journals Limited, which runs the National Herald. It took over 800 crores in assets of AJL and according to the Income Tax department, this should be considered an asset of Young Indian shareholders Sonia Gandhi and Rahul Gandhi, for which they should pay tax. The Congress has claimed that the Young Indian is a non- profit, and so the shareholders cannot make any money from its assets.

The Enforcement Directorate has argued that Young Indian has not done any charitable work and cannot claim benefit. Its only transaction was the transfer of AJL’s debt. The Congress has countered that the newspaper is the charity.

The principal officer, senior party leader Mallikarjun Kharge, has been summoned to get the search concluded. As and when the authorised person presents himself for concluding the search, seal will be lifted, sources said.

Heavy security was also deployed outside the home of Congress chief Sonia Gandhi and the roads leading to the Congress headquarters were temporarily barricaded.

The Congress alleged the party was “under siege” by the government which, it said, surrounded its headquarters and the homes of party chief Sonia Gandhi and Rahul Gandhi as if they were “terrorists”.

Senior Congress leader, including Jairam Ramesh, Ajay Maken and Abhishek Singhvi termed it an “undeclared emergency” and said that their party will not be intimidated by this kind of “petty politics”.

On Tuesday, raids were carried out by the probe agency at 12 locations in the national capital and at other places days after Congress chief Sonia Gandhi was questioned in the case. 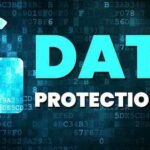 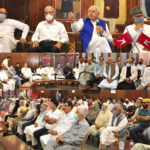