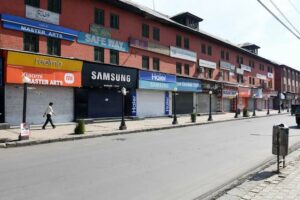 Srinagar, Jun 10: A spontaneous protest shutdown was observed in Srinagar on Friday while the people from different parts of Kashmir staged a demonstration against the blasphemous remarks by two now-suspended Bharatiya Janata Party (BJP) spokespersons.

However, curfew like restrictions remained in place in Bhaderwah, Doda and Kishtwar. Mobile Internet and high-speed fibre internet services were also been snapped in these districts.

According to the news agency—Kashmir News Observer (KNO), all the shops and major markets in Srinagar including the commercial Lal Chowk remained closed as mark of protest against the disrespectful remarks on Prophet Muhammad (SAW).

Reports reaching KNO said that the people including both men and women staged protests after mandatory Friday congregational prayers today to demand punishment against the erstwhile BJP leaders, who made blasphemous remarks.

The protests were held at Tailbal, Fateh Kadal, Tengpora Byepass, Batamaloo, Mehjoor Nagar Natipora and Chanapora where people raised slogans in favour of Islam and against the persons involved in making blasphemous remarks.

In Central Kashmir’s Budgam, a protest rally was carried out from Imam-Bada Budgam to Main Chowk.

Besides, the mobile internet also remained suspended in Srinagar today as a precautionary measure.

Meanwhile, curfew-like restrictions were imposed in Bhaderwah, Doda and Kishtwar in wake of the protests there by the people.  Reports further said that the post-Friday prayer protest was held at Bhaderwah. However, police intervened and dispersed off them peacefully. —(KNO) 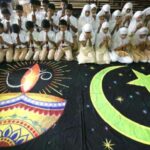 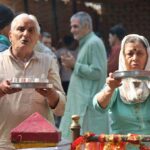