New Delhi, July 30: The central government’s fiscal deficit touched 21.2 per cent of the annual target in the June quarter as against 18.2 per cent in the year-ago period, according to official data.

The fiscal deficit is the difference between total expenditure and revenue of the government. It indicates the total borrowing that are needed by the government.

In actual terms, the fiscal deficit was at Rs 3.51 trillion at the end of the first quarter of 2022-23, data from the Controller General of Accounts (CGA) showed on Friday.

The country’s fiscal deficit is projected at 6.4 per cent of the GDP for this fiscal ending March 2023 as against 6.71 per cent for the previous year.

As per the monthly account of the Union government up to June 2022 released by CGA, the receipts stood at Rs 5.96 trillion or 26.1 per cent of the corresponding Budget Estimates (BE) 2022-23 of total receipts.

In the latest June quarter, the total expenditure incurred by the central government was at Rs 9.47 trillion or 24 per cent of corresponding BE 2022-23. It was at 23.6 per cent of BE 201-22 in the corresponding period. 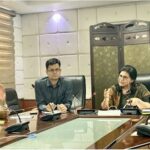 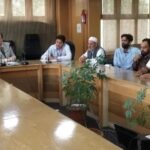