Follow us
Menu
Follow us
Search
New Delhi: The two-day Goods and Services Tax (GST) Council meeting, which begins on Tuesday in Chandigarh, is likely to discuss some major taxation issues in the country.  So what are the issues that are expected to be taken up during the meet? What to expect?
Compensation extension
Issue: While the Centre has in-principle agreed to extend the compensation cess until March 2026 for repaying debt, many states are seeking at least two-year extension of the regime citing revenue shortfall. The cess, meant to compensate states for GST-linked loss of revenue, is to end on June 30, 2022.
Expected: The Council is unlikely to consider states’ demand for status quo as official data suggests that revenue shortfall for states has narrowed in FY22.
Rate revision, pruning & exemptions:
Issue: An interim report of a GoM on rate rationalisation, suggesting correction of the inverted duty structure and removal of some items from exempt list, will be tabled. Also the report of the Fitment Committee, which suggested tweaking rates for a handful of items and issuing clarification in case of majority of items, will be discussed.
Expected: The Council will review the GoM report, suggesting higher rates for leather goods, printing ink and LED lights etc, and removing exemptions for mass products. It may defer rate restructuring, including changes in the current GST slabs, for three months as requested by the GoM due to inflation concerns.
GST systems reforms to curb evasion:
Issue: A report by a ministerial panel, suggesting ways and means to minimise tax evasion, will be on the table.
Expected: The Council to review the report that recommends tightening of registration process in the case of high-risk taxpayer, use of geo-tagging and physical verification.
Online gaming & e-way Bill on gold movement
Issue: Argument over distinction between online skill gaming and gambling.
Expected: A GoM report suggests imposing a flat 28 per cent on online gaming at par with gambling and betting. The Council to clarify on tax treatment with respect to valuation.
E-way bill on gold:
Issue: Currently, e-way bills are compulsory for inter-state movements of consignments valued over Rs 50,000, except gold. This exemption leads to tax evasion.
Expected: The Council to take suggestions of a ministerial panel suggesting a minimum threshold value of Rs 2 lakh for generating such e-way bills, leaving it to states to take a call.
Easing compliance:
Issue: Due to disruption caused by Covid, industry sought certain relaxation in compliance for taxpayers.
Expected: The Council likely to waive the requirement for filing refund claims and may also extend the timeline for certain return filing without late fees.
Source: BS. Headline by Ziraat Times 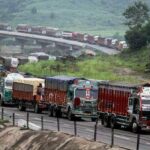