Srinagar, Mar 30: Jammu and Kashmir Transporters Union have called off their strike on March 30 after the government assured to redress their all grievances.

Speaking to Ziraat Times, Sheikh Muhammad Yusuf said after a late night meeting with Divisional Commissioner Jammu, they have called off a one-day token strike.

” Government representatives assured us that all our demands will be fulfilled and also a committee will be constituted to look into the issue of the 25-year life of commercial vehicles which was reduced to 20 years,” he said adding that because of this development strike call have been called off. 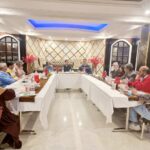