In her keynote address, Smt Sitharaman thanked the people of Jammu & Kashmir for their contribution to the efforts in enabling the commissioning of ‘The Chinars’ Aaykar Bhawan and the attached facilities.

Dedicating the project to the people of the Union Territory of Jammu and Kashmir, she said that the Income Tax office at Srinagar will act as a bridge to connect the people of the region to the best taxpayer services and also help them in their taxation issues through the Aaykar Sewa Kendra.

Sitharaman observed that it will provide an enabling environment for the “Jan bhagidari” in the development of the region.

The Finance Minister said that the new facility inaugurated today will facilitate the taxpayer services, while ensuring a more accessible, people friendly and transparent tax system.

Taxation is not only a collection of Taxes but people’s participation, the sense of ‘Jan Bhagidari’, she added.

The Finance Minister reiterated the Government of India’s support to Jammu and Kashmir and read out the projects completed under PMDP and those in the pipeline for taking Jammu and Kashmir to new heights of development and prosperity.

Later, in her interaction with tax administrators and stakeholders at SKICC, Smt. Sitharaman urged the officers of both CBDT & CBIC to be agents of change and reach out to the industry and business individuals to ascertain their expectations from the Government.

While emphasising that officers of both CBDT & CBIC should work collectively, the Finance Minister also stressed upon the importance of their role as facilitators & educators, making themselves more accessible to the taxpayers of the region to provide better taxpayer services

In his keynote address at the ‘Aaykar Bhawan’, the Lt Governor said that inauguration of the new income tax and residential building ‘The Chinars’ is a sign of socio-economic change taking place in the Union Territory of Jammu and Kashmir.

Expressing gratitude to the Finance Minister for the economic reforms in J&K, the Lt Governor said that the ‘The Chinars – Aayakar Bhawan’ will play a significant role in streamlining the process for the taxpayers of J&K, observed the Lt Governor.

Under the leadership of Prime Minister Shri Narendra Modi since 2014, the income tax system has been made vibrant and transparent. The implementation of ‘Vivad Se Vishwas’ scheme byPrime Minister is the first major revolution in the history of tax system.

The Lt Governor said that during the last about two years, J&K has been steadily progressing in true sense, offering opportunities to women, youth, entrepreneurs and farmers alike. The historic Industrial Scheme worth Rs 28,400 cr has opened up investment opportunities for people from across the world. It will certainly lead to more development and prosperity in Jammu and Kashmir. We have already received proposals worth Rs 29,000 cr and we expect to reach the figure of 35,000 cr by ending December, he added.

Reiterating his resolve of bringing transparency in the governance system, the Lt Governor said that more and more technological interventions are being made to ensure a responsible, accountable and corruption free system in J&K. We have developed tools like ‘JKBEAMS’, through which a person sitting in far flung areas can monitor the spending of each penny on public projects. For the first time in the history of Jammu and Kashmir, physical verification of projects has been made mandatory, the Lt Governor added.

Speaking during the interaction with tax administrators and stakeholders, the Lt Governor termed the taxpayers of the country as the most valuable allies of the Income Tax Department.

I believe that the taxpayer services of the country have become world class today. This has increased the confidence of the common citizens and the business world, and a new ideal model of the tax system has emerged before the country, the Lt Governor observed.

Congratulating the officers of the tax department on beginning of the new chapter of Income Tax Department in Jammu and Kashmir, the Lt Governor made an appeal to various trade, industry organizations and people associated with the tourism industry for working hand in hand with the tax department for the progress of Jammu and Kashmir and paying tax for providing better facilities and infrastructure to the common citizens.

The Lt Governor said that after August 2019, constructive reforms have been brought in the economic and social system of Jammu and Kashmir.

In the last 16 months, we have tried to take the benefits of reforms to those important sectors of the economy which remained neglected earlier, so that they too can play their valuable role in nation building, he added.

New markets are being provided to the inherent possibilities in agriculture, horticulture, small scale industries, handicraft and other sectors. Red-tapism and unnecessary government interference in business has been abolished, and priority is being given to proper implementation of policies, the Lt Governor apprised the Finance Minister.

The Lt Governor further informed that in September last year, a stimulus package of Rs 1353 crore was given for the business class suffering from Corona, from which three and a half lakh business institutions were directly benefited. 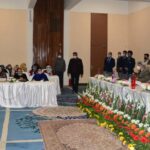