JAMMU/SRINAGAR, OCT 3: Lieutenant Governor Manoj Sinha today met the protesting nursing staff whose contract had expired and extended their engagement for another three months. He met the health workers separately at Government Medical College, Jammu and Raj Bhawan, Srinagar.
The Lt Governor assured the health workers engaged on contract that new positions of paramedical staff would be identified and advertised soon.

The Lt Governor said that Corona Warriors will be given weightage in the recruitment process.

The Lt Governor during the meeting at Raj Bhawan, Srinagar, told the senior officials that vacant nursing staff position in the UT should be identified as soon as possible and recruitment process should be initiated to benefit the health workers. “Our health workers worked tirelessly and they deserve high praise,” Lt Governor said.

The nursing staff at Jammu expressed gratitude to the Lt Governor for visiting them and assuring the extension of their contract by three months. Dr. Shashi Sudhan Sharma, Principal & Dean GMC Jammu besides Medical Superintendent GMC were present. 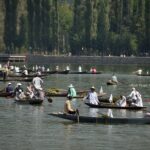 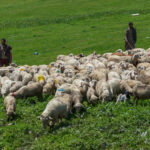