SRINAGAR, OCT 3: Tribal Affairs Department J&K has initiated a plan to offer gainful employment to 10,000 tribal youth apart from a number of skill development courses and employment opportunities. Phase-I of the mini Sheep Farm scheme was formally initiated with draw of lots among the applicants across various districts conducted by the Sheep Husbandry department. In phase-I under the Sheep Farming scheme 1500 youth have been selected, an official statement said on Sunday.

The mini Sheep Farm scheme launched by the Tribal Affairs Department aimed at establishment of 1500 mini Sheep Farms this year followed by 30% addition every year. The scheme entails to establish more than 10,000 such sheep farming units in next 4 years. Sheep Husbandry Department is implementing the scheme with active participation of tribal farmers. An awareness programme has also been initiated by Sheep Husbandry Department to elicit greater response from tribal concentration areas.

More than 6000 applications were received in various districts under the flagship scheme which was launched in 13 districts for establishment of 835 mini Sheep Farms. The scheme is 100% funded by J&K Tribal Affairs Department. A total of 5225 applicants were found eligible under the scheme and draw of lots was conducted in all 13 districts selecting 835 tribal youth for establishment of Sheep Farms. Further, every district has also maintained a 10% waiting list of eligible tribal youth. The draw of lots was supervised by District Sheep Husbandry Officers in presence of DDC members, BDC Chairpersons and PRI members. Director of Sheep Husbandry, Kashmir/ Jammu are supervising the flagship scheme.

Secretary, Tribal Affairs Department, Dr Shahid Iqbal Choudhary informed that under the guidance of Lieutenant Governor J&K the UT administration earlier initiated an ambitious plan to offer gainful employment to 10,000 tribal youth this year which involved establishment of 1500 mini Sheep Farms in two faces. He further informed that Departemt is working on process to establish 500 dairy farms and 700 more mini Sheep Farms under the scheme apart from 17 milk villages and support for procurement of milk chilling plants, packaging units and transportation.

The draw of lots was held in 13 districts covered under Phase-I which include Samba, Kathua, Doda, Reasi, Poonch, Rajouri, Srinagar, Shopian, Kupwara, Anantnag, Ganderbal, Pulwama and Kulgam while remaining districts will be covered in Phase-II later this year. The schemes includes establishment of sheep units along with related infrastructure, insurance, veterinary healthcare, market linkages and skill development.

Pertinently, two youth will be trained for each of the Sheep Farm under Skill Development component of Mission Youth offering opportunities for value addition and market linkages. The Agriculture Skill Council of India has been roped in by the Tribal Affairs Department to impart training to 1500 youth in Phase-I in coordination with Mission Youth and J&K Skill Development Mission. Financial institutions have also been roped in for providing financial support to tribal youth desirous of establishing bigger Sheep Farms with 200-500 livestock. 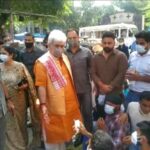 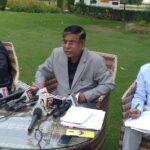