During his visit to EDI, Advisor exhorted upon the officers to come up with innovative measures and interventions to catalyze the entrepreneurial atmosphere and directed them to focus on innovative and modern approach to be adopted for upgrading the working atmosphere of the Institute.

He also said that the post establishment survey should find out the number of success stories and see if the desired objectives are being met. He said that survey should be conducted after every six months to determine the status of a particular unit, whether the established units are running on profit or not and they should be provided with post establishment guidance wherever required.

He directed for advanced skill development and specialised trainings including new skills relevant to the present day needs like IT and other fields having market potential.

Maintaining that training and counselling determine the success rate of the establishment of the ventures and their subsequent success, Advisor said that the role of EDI is very important in terms of showing a way forward to the aspiring entrepreneurs and directed to handle trainings and modules very carefully taking all aspects into consideration so that success rate of budding entrepreneurs is maximised.

He advised the EDI officials to ensure advanced skill development and specialized training to the youth in consonance with the emerging requirements and trends.

He further said that tie-ups with reputed resources nationally and internationally to acquire the mentorship must be pursued and post establishment difficulties of the entrepreneurs should be taken care of. A relation between the entrepreneur and the Institute should be established and maintained so that the success stories are shared with the candidates being guided by the institute.

Highlighting the importance of pre and post establishment surveys, he directed the zonal officers to conduct an intensive study of their respective districts and find out the potential of the district and to come up with the ideas that could be translated into the real success stories. He stressed on the need to develop district-level plans and conduct baseline survey about the potential of various business activities in each district. The survey should be based on the potential of the activities, neglected areas and difficulties being faced by the aspiring entrepreneurs. He stated that every district is unique and has specific market potential and universal activities will not always yield good results.

The Advisor highlighted the need for women empowerment and said that the government is giving lot of thrust in this regard. The Advisor directed the officers of EDI to focus on programmes aimed in this direction and said that we are ushering into a new era of women empowerment. He also said that women have been able to establish their own business ventures and many success stories are emerging from them. To institutionalise the potential of a particular district with regard to women empowerment, Advisor directed them to find out the possibility of dovetailing schemes with NRLM so that maximum number of women is benefitted through the twin schemes.

Advisor also stressed on the need for a single-window clearance system for the aspiring entrepreneurs and said that districts should conceptualize such setups so that the prospective entrepreneurs do not have to throng various offices to clear their documents.

Stressing on the need to create a conducive and vibrant atmosphere for the aspiring entrepreneurs in the campus, Advisor said that new subjects have to be introduced to meet the emerging market trends and said that skill development set has to be enhanced to fully exploit the potential of the Institute. While enquiring about the courses being offered at JKEDI, he also directed them to look into the functioning of Atal Incubation Centres and said that difficulties have to be ironed out.

Director JKEDI, Mehmood Ahmad Shah, gave a detailed presentation on the achievements and issues faced by the Institute in terms of developing the entrepreneurial culture in the Union Territory.
The Advisor also interacted with the faculty members and other officials of the Institute. He urged upon the Institute to further strengthen their efforts to make people realize that there are ample opportunities for earning a dignified livelihood.

The Advisor gave patient hearing to all the issues raised during the review meeting and assured that the government would take due care during the implementation of different policies and asserted all the requisite support to the Institute. 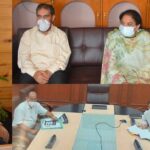