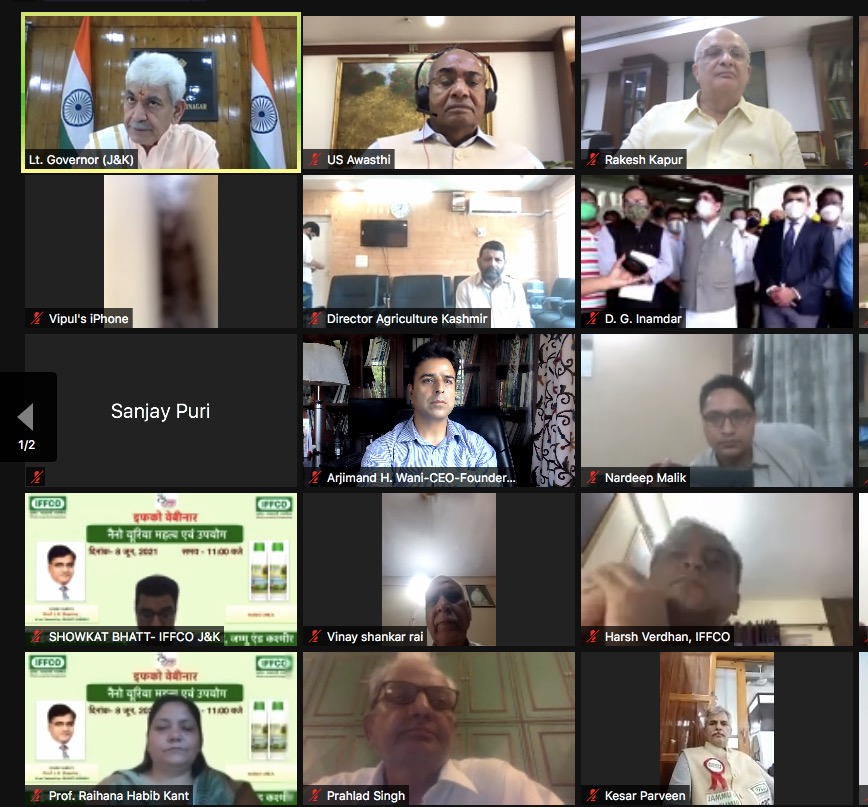 • LG invites IFFCO to establish Nano Urea plant in J&K
• 15,000 bottles of Liquid Nano Urea dispatched for farmers of J&K from Gujarat, will be equivalent to about 675 metric tonnes of conventional urea
• 7500 bottles each to be distributed to both divisions of J&K

“I express my heartfelt gratitude to the Hon’ble Prime Minister Narendra Modi for encouraging the agricultural scientists and farmers, for the last many years, to reduce the use of urea. His vision has made this into a reality, which will bring reforms in the agriculture sector of J&K”, added the Lt Governor.
The Lt Governor also congratulated Dr. U. S. Awasthi, Managing Director, (Indian Farmers Fertiliser Cooperative Ltd) IFFCO and his entire team members for developing the world’s first Liquid Nano Urea, which will enhance crop yield, protect crops from seasonal damage while maintaining soil quality. The historic initiative aimed at saving the environment and keeping the soil of the agricultural fields fertile.

It was informed that 15,000 bottles of Liquid Nano Urea are leaving Kalol, Gujrat today for the farmers of Jammu and Kashmir. Out of this, 7500 bottles will be distributed to the Jammu division and 7500 to the farmers of Kashmir division. The total consignment of liquid nano-urea will be equivalent to 675 metric tonnes of conventional urea.

While highlighting the immense scope of growth in agriculture sector of the UT and the impact the new initiative will bring in the sector, the Lt Governor observed that with the introduction of Liquid Nano Urea to the farmers of the UT, J&K’s agriculture sector can contribute to Prime Minister’s campaign for self-reliant India. In Jammu and Kashmir, along with the promotion of traditional agriculture, horticulture, emphasis is being laid on value addition farming, so that the farmers get a fair price for their crops. 70 percent population of the UT is dependent on agriculture. This liquid Nano Urea can bring about a new revolution in the farming sector of J&K, said the Lt Governor.

Citing the positives of the use of Liquid Nano Urea, the Lt Governor maintained that it will bring a reformative change in farming practices and benefit the farmers, especially those involved in traditional and high value crops. Now, only half a litre of liquid nano urea will replace one sack of manure. There are many such hill farms in many districts, where farmers have to travel several kilometers to reach their agriculture fields. Instead of carrying a bag of urea, now the farmers have to carry only half a litre bottle of urea, he added.

The excessive use of urea is resulting in making the soil barren across the country. It has not only affected the nitrogen cycle but also harms the environment and people’s health. Initially, many farmers may get benefitted due to its excessive use, but later the same urea destroys the fertility of the fields, the Lt Governor said.

On the financial aspects of the new initiative, the Lt Governor observed that the Liquid Nano Urea will subsequently bring down the cost of farming. Cost of one bottle of this urea is 10% less than that of a 45 kg of urea bag. Since, Nano Urea does not require subsidy, the government will save about Rs 27,000 crore, besides providing a benefit of Rs 28,000 crore to the farmers by reducing their cost on agriculture, he added.

In 2017, the Prime Minister had said that when India celebrates 75th anniversary of Independence in 2022, we should reduce the use of urea by half. I sincerely hope and believe that the way IFFCO is working on the call of the Prime Minister, soon we will be successful in realizing his vision, said the Lt Governor.

On the occasion, the Lt Governor also added that the J&K Government is intended to increase the productivity of Basmati agricultural land.

The Jammu and Kashmir administration has taken a policy decision for converting 60,000 hectares of Basmati agricultural land into more productive one, and for this, very good quality seeds are also being made available for farmers at cheaper rates, said the Lt Governor.

In current financial year, we have decided that at least 7.5 lakh farmers would be provided good seeds at a cost of Rs 16 crore. In this entire campaign, farmers are being encouraged to switch over to organic farming, he added.

The UT Government is putting in its best efforts to provide all facilities like harvesting, management and processing to the farmers of Jammu & Kashmir and providing linkages for their products to national and international markets.

Highlighting various initiatives undertaken by the J&K Government to bring reforms in the horticulture sector, the Lt Governor observed that the UT administration has signed an MoU with NAFED through which 5500 hectares of high density Apple, Walnut, Mango, and Litchi would be cultivated in the next five years. For this, an investment of about Rs 1700 crore will be made in the Union Territory. Three cold storage clusters will also be set up at Kathua, North Kashmir and South Kashmir with an investment of Rs 500 crore which will provide more convenience to the farmers.

GI tagging of regional products is being done to further empower the farmers through effective marketing of their products. The quality of many of our products like Saffron, Walnut, Cherry, Strawberry, Plum, Almond, and Apricot is no less than those produced in other countries. Kashmir’s Saffron was launched in Dubai in December after GI tagging. The world market was dominated by the Iranian Saffron, but now Kashmir’s Saffron is making its mark in the global market, remarked the Lt Governor.

Underscoring the reformative measures taken by the UT Government for the sustainable development of agriculture sector, the Lt Governor observed that the Government is focused on increasing the income of farmers and providing employment to more and more youth in collaboration with the administration and scientists, researchers related to agriculture. To promote agriculture and horticulture in Jammu and Kashmir, this year’s budget has been increased to Rs 2008 crore, which is Rs 695 crore more than the previous year, he added.

Agricultural Universities of Jammu and Kashmir are being roped in for promoting food processing units and agriculture related start-ups. Despite the corona pandemic, scores of agricultural programmes have been organized in the past ten months. With the help of Krishi Vigyan Kendras, we are trying to reach every farmer to ensure the use of innovation and technology in agriculture and allied sectors, said the Lt Governor.

In order to take technology to the fields of farmers, it has been decided that this year, we will provide machinery worth Rs 65 crore to the identified 30,000 farmers, besides providing modern irrigation facilities to 25,000 farmers at a cost of Rs 91 crore.
Further, the state-of-the-art training will also be imparted to around 35,000 farmers to implement new experiments in agriculture with the changing environment for which provision of Rs 26 crore has been kept, he continued.

Speaking on the Skill development and Employment generation opportunities of rural youth, the Lt Governor said that this has been one of the focus areas of the J&K Government, for which special provision has been kept in this year’s budget. We have made a provision of Rs 74 crore to increase the capacity of cold storage as well as provide employment opportunities to our youth, he added.
The Lt Governor also stressed on maintaining FPOs in every district for continuous market linkage for building a strong framework for farmer-industry connect, besides giving a determined push to agricultural entrepreneurship.

The Lt Governor, in the concluding remarks, extended his appreciation towards the entire team of IFFCO and invited them to establish Liquid Nano Urea plant in the UT of J&K.

Meanwhile, Dr. U. S. Awasthi, Managing Director, IFFCO spoke about the objective behind developing Nano Urea (Liquid). It is indigenously developed after many years of dedicated and sincere research of IFFCO’s Scientists and Engineers through a proprietary technology developed at Nano Biotechnology Research Centre, Kalol. IFFCO Nano Urea Liquid has been found effective and efficient for plant nutrition. This increases the production with improved nutritional quality, besides having a positive impact on climate change and sustainable development, he added. 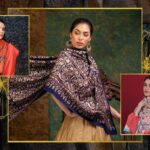