Innovators aren’t born, they can be made, according to recent research from the University of California San Diego’s School of Global Policy and Strategy.

Existing theories and previous research on how innovation occurs largely assume that it is an ingrained quality of the individual and that only people with this innate ability seek and attain jobs that require it. However, economist Joshua S. Graff Zivin and professor of management Elizabeth Lyons tested these previously held notions by creating a contest for UC San Diego’s engineering and computer science students. The competition, outlined in their National Bureau of Economic Research working paper, was designed to answer the question: Are persuaded innovators less capable than those who naturally gravitate to innovative activities?

The mobile application contest was advertised through various medium on campus and attracted around 100 students. In order to differentiate between self-selected innovators and induced innovators, a random subset of eligible students who did not sign up by the contest deadline were offered a monetary incentive of $100 to participate. In total, 190 students signed up.

Submissions between the two groups were evaluated by technology industry participants who acted as judges for the contest and who had no knowledge of which group the proposals came from. The judges evaluated each application across four categories; functionality, user-friendliness, novelty and potential commercial value.

Though induced participants were less likely to be drawn from majors that provide the most relevant skills for the competition, such as electrical engineering and computer science, and had lower cumulative GPAs, their success was statistically indistinguishable from those that were innately drawn to the competition.

Whether innovators can be created, and how they fare relative to those who self-select into innovative activities also has important implications for public and private policy, according to the authors.

“If individuals are being held back by accurate beliefs about their ability to perform, as our results suggest, then efforts to help individuals overcome the psychological barriers that inhibit their participation could potentially enhance innovative output across a wide range of settings,” Graff Zivin. “This shows that psychological barriers that, if overcome, could meaningfully contribute to the innovation process.”

Contest entries were scored from 1-5 on each category for a total score maximum of 20. The developers of the top three applications were awarded prize money.

“We selected students at UC San Diego’s Jacobs School of Engineering since these students have technical capabilities to produce impactful inventions,” Lyons said. “In addition, engineers are frequently the targets of interventions to increase innovative activity.”

To further explore the psychological factors of innovation, the researchers randomly offered encouragement to subsets of both the induced and self-selected contest participants in order to examine the importance of confidence-building interventions on each sample. While encouragement had no impact on performance on average, and was not differentially important for the induced sample, the authors did find surprising results based on student GPA.

“While our work clearly suggests that innovators can be created through inducement subsidies, whether they will also benefit from confidence-building encouragement of the sort that is standard management practice in many firms may well depend on their intrinsic motivation to succeed in addition to having technical capabilities.”

Regardless, understanding the conditions under which productivity enhancing innovation occurs is critical for economic development and can provide novel insights into the arise of new inventions, according to the authors.

Lyons’s research focuses on the intersection between technology and innovation strategy, international management and organizational economics. She studies the effects of entrepreneurship training on career decisions and more. 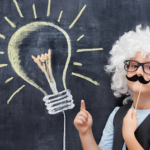