JAMMU, NOV 23: J&K government’s Administrative Council (AC) which met here under the chairmanship of the Lieutenant Governor, Manoj Sinha, approved the delegation of powers for granting Administrative Approval, to Gram Panchayats, Block Samitis and Zila Parishads for execution of works, the expenditure of which will be met out of Panchayats’ own resources.

“The decision comes as a significant step towards empowering PRIs as it shall enable them to set their own priorities and help them in timely execution of works out of own resources of the panchayats.
In the backdrop of its mission to enhance inclusive growth of rural areas in the Union territory, the Government through this decision aims to promote self reliance in financial matters”, an official spokesperson said today. 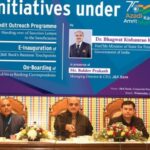