SRINAGAR, NOV 18: Union Minister of State for Labour & Employment, Petroleum and Natural Gas, Rameshwar Teli on Friday said that providing better avenues of employment and increasing social security measures for the youth and working class of Jammu and Kashmir are among the top priorities of the Central Government.

Addressing the media persons at Tagore Hall Srinagar, the minister highlighted the initiatives of the Central Government under the leadership of Prime Minister for the benefit of common people in the Union Territory. He said that work on various development projects is going on at full pace and the same will be completed ahead of the stipulated timelines.
Responding to the questions of the media the Minster said that unemployed youth are being provided loans on zero interest basis and e-SHRAM cards are issued to tackle the problem of unemployment. He said that the government aspires to complete the target of issuing 38 crore e-SHRAM cards in the country of which 30 crore cards are already issued. The Minister further added that the problem of child labour in J&K will also be taken up with the ministry and addressed in time.

Later the minister participated in a delegate convention of Trade Union Coordination Centre (TUCC) in which the leaders and members of different worker unions participated and deliberated upon the pending demands of temporary, seasonal and other workers in different departments.

Addressing the convention, the Minister assured the delegates that the issues pertaining to the working force of J&K will be put before the Central Government & the UT administration for their early settlement especially regularization of 61000 temporary workers and utilization of services of seasonal workers.

He added that the UT Government will be apprised to implement the minimum wages act as per the components of revised rates at par with the other states of the country.

The minister highlighted the initiative taken by the central government for the welfare of the workers. He assured the leadership of TUCC for every possible assistance from his Ministry for the early settlement of their genuine demands. 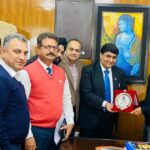 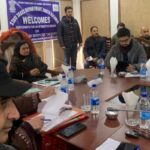