Four cases were presented before the Committee under PMMSY and Capex budget for the year 2022-23 and after detailed discussion the Panel Chairmanship of DDC approved all the cases for the creation of Trout rearing units.

Pradhan Mantri Matsya Sampada Yojana (PMMSY) is a central scheme aimed at harnessing the fisheries sector potential in a sustainable manner to double the income of Fish Farmers and Fishers.

The DDC directed the concerned department to closely monitor the establishment and management of existing and newly approved Fish Farms by conducting regular inspections. He further asked the department to identify more potential areas with a good source of cold stream and spring water for establishment of more units. He also inquired about the functioning of Trout hatchery Bheja with regard to production of fish seeds and fingerlings and the same being provided to farmers of the district for rearing in their units on priority basis.

The DDC urged the department to encourage Fish Farmers to create cooperatives and to explore the full potential of this lucrative sector.

Besides, the department was directed to launch an intensive campaign for implementation of the scheme across the district by roping in the Panchayati Raj Institutions.

The DDC further directed all the members of the Committee to synergise their efforts to realize the aim and objective of the scheme in letter and spirit. The meeting suggested exploring the possibility of implementing the scheme in convergence with RDD and other departments.

Among others, those present in the meeting were SE Hydraulics, CPO Doda, ACD Doda, CAO, District Head KVK, AD Fisheries, District Manager Lead Bank, besides progressive farmers and other concerned. 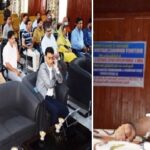 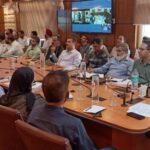