New Delhi, Aug 2: Finance Minister Nirmala Sitharaman on Tuesday put a strong defence of her handling of inflation as she compared current prices to rates existing six months before the UPA exited power, and said the GST regime has not increased the tax burden on families.

Replying to a debate on price rise in Rajya Sabha, she said the GST tax on food items such as rice, wheat flour and curd was agreed to by all states and that such a levy pre-existed on one or the other daily essentials in 22 states.

Clarifying on misgivings over the levy of GST tax on some of the most talked about items, the minister said no tax has been levied either on cash withdrawals from bank accounts or on crematorium or hospital beds and ICUs.

A GST has been levied on the purchase of printed cheque books by banks from printers, she said adding there is no tax on cheque books used by ordinary bank customers.

Similarly, a GST has been levied only on the construction of new crematoriums and the equipment used in it. Funeral, cremations or burials are not taxed, she said.

A GST has been levied only on hospital rooms whose daily rent is over Rs 5,000 and not on hospital beds or ICU.

With opposition breathing fire over a rise in prices of daily essentials, Sitharaman compared the current price of tomato, onion and potato with that prevalent in November 2013 to say the rates are stable.

She went on to attack the Congress-led UPA regime of that time saying prices had seen triple-digit growth, with onion rates crossing Rs 100 per kg mark.

She did not mention of the prices that were there when the UPA exited power in May 2014 or onion prices had crossed Rs 100 per kg mark in November 2019 and again in October 2020.

“GST has not increased the burden on families. The rate (of taxation) on some of the items prior to GST was far higher,” she said. “Nobody is saying or nobody is in denial about price rise. We will see the numbers also, and what are the ground realities also. We are not running away.” The government and the RBI are taking “enough steps” to keep the inflation rate at 7 per cent.

Ideally, it should be below the 6 per cent band. “Nobody is denying.” Based on ground reports, the government has had a targeted approach to dealing with inflation. “And through the targeted approach, we are reaching sections which so desperately need that help. Of course, yes, you can do a lot more. Nobody’s denying that.

But that doesn’t mean we are saying no, we won’t do anything at all.”

Replying to criticism of record high cooking gas LPG prices, she said the government is giving a subsidy of Rs 200 per cylinder for 12 refills in a year to the poor who got connections under the Ujjwala scheme.

That subsidy would reduce the price to Rs 853 per 14.2-kg cylinder – a rate that opposition MPs said was way too high.

Sitharaman had an angry exchange with Ranjeet Ranjan of Congress who tried to counter her by reading from an RTI reply to say that a sizeable proportion of over 9 crore Ujjwala beneficiaries had either not bought any LPG refill or just 1 or 2.

The point being that Rs 200 subsidy for 12 cylinders in a year is something that a Ujjwala beneficiary would never be able to utilise.

The Minister said she is replying to every point being raised but can’t reply in the fashion an MP wants but admitted that the subsidy may not be enough.

LPG prices, she said, were not in government hands.

On levy of GST tax on wheat, rice, pulses, curd, paneer, lassi and other daily essentials, Sitharaman said the 5% tax is only on pre-packed and labelled commodities and not those sold loose and hence does not impact the poor.

“Poor’s consumption of any food item is not taxed,” she said.

Prior to the advent of GST in July 2017, every state levied a tax on some or the other food items such as cereal, pulses, curd, lassi and buttermilk, she said reading out some of the states that levied tax.

When she said West Bengal levied a tax on paneer in the pre-GST era, TMC leader Derek O’Brien wanted to raise a point of order. However, when Bhubaneswar Kalita, who was in the chair, disallowed him, the TMC MPs staged a walkout in protest.

The minister said the Indian economy is better placed than its peers. “Indian economy compared to the situation prevailing in many of our peer groups and compared to the situation in many of the developed economies is definitely much better.” On opposition barb of the government doing only for the billionaires Mukesh Ambani and Gautam Adani, she said the government has done everything keeping the poor in mind and by dragging names as “absolutely politicising the debate”. 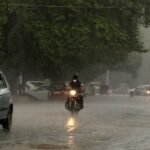 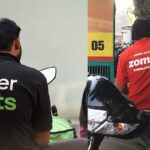