Mumbai, Jan 28: The rupee plunged by 48 paise to close at record low of 78.85 (provisional) against the US dollar on Tuesday, weighed down by persistent foreign capital outflows and a surge in crude oil prices.

At the interbank foreign exchange market, the rupee opened lower at 78.53 against the greenback and finally settled at 78.85, down 48 paise over its previous close.

During the session, the rupee touched an all-time low of 78.8550 against the American currency.

“The Indian rupee touched an all-time low against the US Dollar amid weak domestic equities and a surge in crude oil prices. Sustained selling by foreign investors also put downside pressure on Rupee,” Anuj Choudhary – Research Analyst at Sharekhan by BNP Paribas said.

The rupee is expected to trade on a negative note on risk aversion in domestic markets and continued selling pressure from foreign institutional investors (FIIs). Elevated oil prices may also weigh on the domestic currency, Choudhary said.

“The Indian rupee touched an all-time low of 78.85 against the US Dollar amid dull capital market participation along with FII’s outflows in the recent past. A sharp surge in crude oil prices from USD 105 to USD 114 also supplied the pressure on rupee skidding down,” said Jateen Trivedi, VP Research Analyst at LKP Securities.

Trivedi further said that sustained selling by foreign investors and FED’s hawkish tone has made the rupee fall by 100 paise in a matter of six trading days.

According to Sugandha Sachdeva, Vice President – Commodity and Currency Research, Religare Broking the Indian rupee plummeted to fresh lows, depreciating by around half a per cent against the dollar owing to a muted trend in domestic equities, and strong gains in crude oil prices.

Oil prices are gaining traction again due to the supply crunch as OPEC members Libya and Ecuador are suspending oil output amid political unrest. Besides, all eyes are on the G7 meeting for further cues as the member nations are contemplating a new set of sanctions, including a proposal to place a price cap on imports of Russian oil.

“High demand from the US and relaxation of restrictions in China could further fuel oil prices on the higher incline and act as a major headwind for the domestic currency,” Sachdeva said.

“Going ahead, we foresee the rupee-dollar exchange rate to remain weak in the near-term, where it can test 79.20 against the US dollar. However, RBI is likely to keep using its FX reserves to curb excess volatility in the Indian rupee, which will provide some cushion to the domestic currency,” Sachdeva said.

Meanwhile, the dollar index, which gauges the greenback’s strength against a basket of six currencies, was trading 0.01 per cent higher at 103.95.

Markets are reassessing their expectations of Fed rate hike. Traders may also take cues from the US consumer confidence data, which is expected to worsen from the previous month.

“Markets may also take cues from Fed Chair Jerome Powell’s speech at the ECB forum later this week. Rupee may trade in the range of 78-79.50 in near-term,” Choudhary added.

Foreign institutional investors were net sellers in the capital market on Tuesday as they offloaded shares worth Rs 1,244.44 crore, according to stock exchange data. 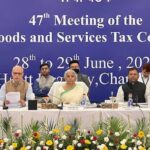