During the meeting, discussion was held on progress achieved, matters pertaining to inter departmental coordination and proposal for setting up of 3 new blocks for promotion of new FPOs.

Dr Singla took stock of the operational FPOs in the district. He emphasized that the concerned departments should identify areas for intervention aimed at reducing supply constraints and to focus on marketing and certification to expand the market for the produce. He said the vision behind setting up FPOs is to ensure maximum profit from value added to the produce accrues to the farmer.

Regarding Breng FPO operational in the district, the participants were informed by DDM Nabard that IGSSS is the CBBO for the FPO have completed a baseline survey. He said that 140 farmers have been registered with the FPO and trainings have been imparted to them.

He said that registration of the FPO with the Ministry of Corporate Affairs also stands completed. He said they have successfully broadcasted 300 kgs of potato seed among the farmers. He said that in one year the turnover has been Rs 12 lacs. Regular board meetings are being held and steps to increase membership were discussed.

Chief Agriculture Officer informed the chair that seeds for several exotic vegetables have been distributed and under the Parvaz scheme, modalities are being worked out for exporting the produce to foreign countries.

Dr Singla addressing the meeting said that marketing and certification are key parameters for value addition and maximizing the profits to farmers. He said that higher profitability will in turn attract more farmers. He laid stress on organic certification of the produce. He said the market or certified organic vegetables has high demand and this gap needs to be tapped.

Operational progress of Shahabad Honey Producers FPO was also discussed. DC highlighted that the FPO can leverage the first honey processing plant in Achabal for processing. He said that labelling and marketing of the produce should be prioritised. He also directed the CBBOs to arrange exposure visits to companies so that farmers can understand the nuances of processing and marketing their products.

Giving an overview regarding the Fish Trout FPO, representative from the CBBO said a farmer club is being formed in each village in Phalagma, Dachnipora, Khoveripora blocks. Further, marketing of the product has been started and 3 tons of trout are being shipped to Mumbai and Pune for sale.
Dr Singla said that a trout processing unit is being setup in the district. He said that farmer mobilization for Fisheries FPO should be expedited.

Small Farmers Agribusiness Consortium was directed to identify blocks and employ CBBOs for 3 upcoming FPOs. DC Singla said that on fast track basis, a detailed baseline survey be conducted in the proposed blocks to identify marketable surplus and an action plan be prepared in consultation with Chief Agriculture Officer.

Regarding ODOP Dr Singla directed LDM to ensure hassle free processing of ODOP cases. Further, strict directions were passed that any cases from unrelated markets, if processed, shall be revisited and cases shall be put up for sanction of District Level Committee. He further said that awareness programs should be held so that more people can benefit from the flagship program.

Food Safety Officer was directed to expedite FSSAI license cases of all operational FPOs on priority. 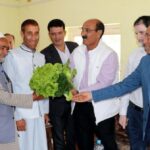