New Delhi, Feb 1: Congress leader Rahul Gandhi on Tuesday dubbed the Union Budget for 2022-23 as a “zero-sum budget”, saying it has nothing for the salaried, middle class and the poor. 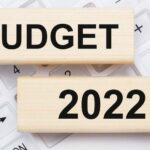