Srinagar, Jan 5 : Morning flights to and from Srinagar International airport were cancelled on Wednesday due to poor visibility while travellers have been advised not to undertake journey on the Srinagar-Jammu national highway (NH) due to inclement weather.

Officials said eight morning flights to and from Srinagar International airport were cancelled while 2 are delayed due to poor visibility.

“As soon as the visibility improves, flight operation will be resumed”, officials said.

Traffic department officials have advised travellers to avoid journey on the Srinagar-Jammu highway because of snowfall and incessant rain along the highway.

Light to moderate snow/rain has occurred in J&K and Ladakh during the last 24 hours. MeT department officials have said the weather is likely to remain cloudy and dry on January 6 and 7. 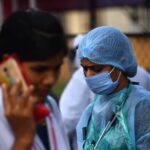