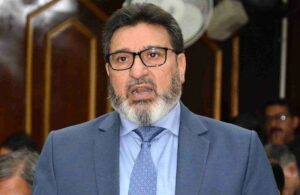 In a statement issued here, Bukhari said that it was unfortunate to know about the plight of the marginalized nomad families during the harsh winter season whose houses were recently dismantled by JDA in a drive which is being questioned for its selective approach.

“JDA displaced them by demolishing their concrete houses and cattle sheds without prior notices which is injustice and should be investigated. From the last several years, the people of Jammu, especially the marginalized section of society, have accused JDA for its selective approach,” he said.

He said that the allegations against the JDA must be probed by a high level investigation team and Lt Governor Manoj Sinha must monitor the investigation.

“These kinds of acts create a sense of insecurity and mistrust against the Govt. There must be accountability and the displaced persons should be resettled appropriately by adopting a humanitarian approach,” he said.

He said that the Apni Party believes that the rights of the Forest Right Act should be extended to the tribal community/other forest dwellers in actual form on the ground and the poor people should not be made homeless for one reason or another.

“The JDA has become infamous for such drives in Jammu. It appears they do not have a proper development plan for Jammu. If several illegal colonies can be regularized selectively, why can’t the houses of nomads whose ancestors have lived in these places and protected the land much before the existence of JDA,” he said.

He said that “There must be a planned housing as well as regularization policy for the residential colonies without partial approach against anyone. And, everyone should get benefits of these policies. In the past too, they launched similar drives and majority of them turned out to be selective as they were focused on the displacement of tribals.”

“We believe that the Govt must step in immediately and hold the erring officials of JDA responsible for their selective approach as it is dividing the society. The Apni Party will not tolerate such elements and we will fight for the rights of tribals and other marginalized sections of society,” he added.

Meanwhile, he also demanded that the colonies of tribals should be regularized and the poor should not be harassed again in the name of anti-encroachment drives.

As a welfare state, he said, the Govt must act for the welfare of the people and should not put the people in unnecessary hardship which cannot be justified.