Jammu, Nov 24 (IANS) A tanker driver was killed in a road accident on the Jammu-Srinagar national highway near the Jawahar Tunnel in Ramban district.

The police said a tanker went out of the driver’s control near the Jawahar Tunnel on the Jammu-Srinagar highway.

“The tanker rolled down into a 400-ft deep gorge. The driver, identified as Ishar Dass of Kathua district, died on the spot.

“Preliminary reports suggest that it was a case of rash and negligent driving,” police said. 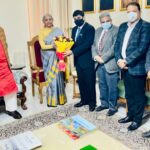