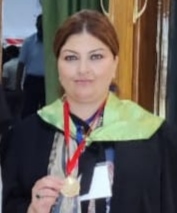 Srinagar. Aug 28: J&K Pharmacy Graduates Alumni has extended its hearty greetings to Maha Drakhsan on securing a gold medal in pharmacy studies. In a statement issued here Alumni Spokesman, Ahmad Kashmiri said that the Alumni is proud of its member for securing a Gold Medal, which was awarded to her in the recent convocation held at Kashmir University for being topper in Pharmaceutical sciences batch of 2014. Indeed, Maha Darakhshan, joined Pharmaceutical Science Department of Kashmir University in 1992 for graduation in Pharmacy and later she got recruited as a senior pharmacist in the prestigious hospital of J&K, SKIMS and rendered her services with dedication.

“Maha Darakhsan continued her higher studies even after her married life and post graduated from the university of Kashmir in the higher studies, thus proving her mettle and setting an example that learning and experimenting has no age bar, no marriage bar” the statement said.