The interactive session was organized by the Department of Animal Husbandry, Kashmir.
Representatives from Health & Medical education Department, Wildlife Department, Revenue Department, Dean FVSC & AH SKUAST-Kashmir participated in the session with an aim to deliberate on the control and containment of Avian Influenza in Kashmir Valley.

Speaking on the occasion, the Div Com emphasized on more public awareness among the masses and directed the concerned to set up an aggressive testing to combat Avian Influenza without lowering the guard.

He assured full cooperation and support with regard to control and containment of Avian Influenza.
The Director Animal Husbandry Kashmir, Purnima Mittal informed the house about the mechanism and strategies adopted by the department in containment of Avian Influenza. Besides, the need of setting up modern infrastructure with regard to aggressive testing was also emphasized.
All the line departments assured to extend full support in control and containment of this deadly disease. 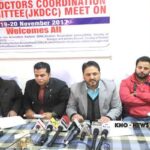