President Joe Biden’s promise for America, as outlined by him in his inaugural address, resembles almost exactly the promised land of Barack Obama’s recently published book , ‘A Promised Land’. A promised land according to Obama , is what American democracy was to be and not what it is. Obama contends that American democracy is in crisis ‘rooted in a fundamental contest between two opposing visions of what America is and what it should be; a crisis that has left the body politic divided, angry and mistrustful and has allowed for an ongoing breach of institutional norms, procedural safeguards and the adherence to the basic facts that both Republicans and Democrats once took for granted.’ He also recognizes ‘ that there are those who believe that it’s time to discard the myth- that an examination of America’s past and even cursory glance at today’s headlines show that this nation’s ideals have always been secondary to conquest and subjugation, a racial caste system and rapacious capitalism and that to pretend otherwise is to be complicit in a game that was rigged from the start.’ He however allows himself some optimism; ‘ And so the world watches America – the only great power in history made up of people from every corner of the planet, comprising every race and faith and cultural practice- to see if our experiment in democracy can work. To see if we can do what no other nation has ever done. To see if we can actually live up to the meaning of our creed.’

It is difficult to resist the temptation to quote him verbatim lest any other way of telling what he has said may result in failing to convey what he has intended.

So Joe Biden’s task of bringing back American democracy from the ‘brink of crisis’ is well laid out on his table and only time will tell whether he will succeed.

A brilliant book titled ‘ Ten Lessons For a Post-Pandemic World ‘ by Fareed Zakaria, the well known host of CNN’s flagship international affairs show, Fareed Zakaria GPS and a world renowned modern day thinker on international politics, makes interesting reading although occasionally it also drags on. Zakaria contends that the world is likely to witness more pandemics in future even if covid -19 is completely eliminated and therefore it should brace itself for such a future. In the introduction titled ‘Bat Effect” he warns that pandemics are inevitable due to the very nature of the way the world is arranged and functioning, open and fast paced and that open and fast paced systems are inherently unstable and fragile. In Lesson 1 ‘Buckle Up’, he says that it is ultimately the national governments themselves who have to fight the pandemics and that in this fight they will often find themselves alone as happened in case of covid-19. Zakaria warns that environmental degradation and continuous invasion of animal habitats by humans are the prime reasons for transfer of viruses from animals to humans. Lesson 2 is titled ‘what matters is not the quantity of government but the quality.’ Here he argues how timely and smart actions by some governments like South Korea, Taiwan, New Zealand, Denmark, Germany, Netherlands and few others helped to quickly contain the spread of covid-19 pandemic in these countries and in contrast how the US government under President Trump bungled. He attributes the failure in US to lack of coordination between the federal
government agencies at the centre and the states notwithstanding the big bureaucracies in both. President Trump’s failure to provide the right leadership in this crisis has also been explained. Lesson 3 is ‘Markets are not enough’. Here, Zakaria talks about the inadequacy of the free market mechanisms for ensuring social and distributive justice and therefore the need for affirmative action from the governments. He has given examples of some free market countries who have done well on welfare measures. In this he singles out Denmark, also hailed by Democrat-Socialist Bernie Sanders as a ‘socialist paradise’, as the best example of a free economy with many welfare regulations and measures. Lesson 4 is titled ‘people should listen to the experts-and experts should listen to the people’, highlighting how the governments and people can go horribly wrong if they run down expert advice, as happened in US itself where experts including the WHO were ridiculed and even accused of lying. Zakaria laments people’s growing distrust of the establishments everywhere which, he argues, needs to be corrected to ensure that the establishments are run only by meritocracy. Lesson 5 is titled ‘ Life is Digital ‘ emphasizing the criticality of digital technology for the anti-pandemic effort, the all pervasiveness of digital technology, reminding of Marc Andreessen’s- why software is eating the world to press the point. Giving an example of the quest for digitalisation, Zakaria talks about rapidly expanding internet in India during the last decade to cover about 550 million people out of 1370 million in 2020. He then talks about Artificial Intelligence ( AI revolution) and its implications for the human race. In Lesson 6 called ‘ Aristotle was right-we are social animals’, Zakaria discusses pandemics under the ‘never ending urbanization’, ‘the post-pandemic city’, ‘the new metropolitan model’ and ‘death and life of great cities, bringing forth the challenges the modern cities with their huge populations will have to face and manage during pandemics. Lesson 7 called ‘Inequality will get worse’ warns of the danger of economic slow down due to pandemics leading to reduced GDP, reduced incomes, reduced access to education, health care and other modern day amenities within both the developing and developed countries and triggering inequalities, with developing countries likely to suffer more inequality between the well off and the poorer sections. Lesson 8 is ‘Globalisation is not dead’, Lesson 9 is ‘The world is becoming bipolar’, between US and a rapidly growing China and Lesson 10 is ‘Sometimes the greatest realists are the idealists’ where Zakaria credits the post war leaders like Roosevelt, Eisenhower and Churchill for acting out of idealism rather than realism to heal the wounds of the post world war II world, although these great leaders except Roosevelt were hard nosed realists.

In conclusion, Zakaria draws from the film’ Lawrence of Arabia’ the phrase ‘ Nothing is Written’ to highlight the power of option, the hard options that governments will have to exercise to deal with the challenges in the post pandemic world. Zakaria writes, ‘so, too, in our times, this ugly pandemic has created the possibility for change and reform. It has opened up a path to a new world. It is ours to take that opportunity or squander it. Nothing is written.’

While Fareed Zakaria has done extremely well in writing this timely warning in great detail, he is likely to be criticized for writing a rather longish book and for having occasionally missed to convey more simply his understanding of the complex issues. But that should not take away any part of the credit that is due to this brilliant new age thinker of the 21st century. 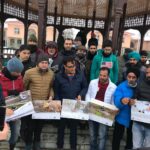