It was earlier reported that Shah Faesal’s PSA was revoked by the government.

“Good to hear @shahfaesal , Peer Mansoor & Sartaj Madani have been released from their unjust PSA detention.

Disappointed that @MehboobaMufti , Sagar Sb & Hilal Lone continue to be detained. It’s high time they are set free as well,” he said in a tweet. (GNS) 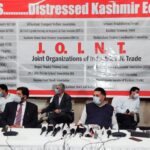